YSF at Work: Ministry with At-Risk Youth in Sierra Leone 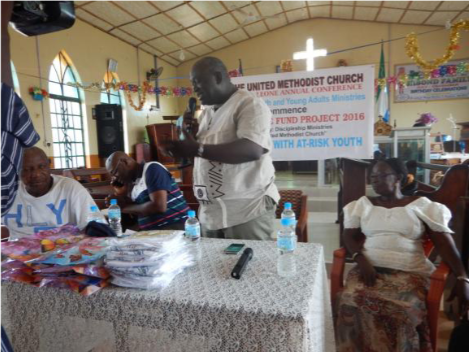 The Ebola virus has severely impacted life in Sierra Leone. School year had been reduced from three terms to two terms. Some extracurricular activities had to be stopped, too. In response to this matter, the Department of Youth and Young Adult Ministries of the Sierra Leone Annual Conference came up with a project to award scholarships to needy students and create a campaign to help stop the stigma associated with Ebola.

The Mayor of Bo City in the Southern Province, talking to students after donating to the scholarship fund

As a result of this project, some young people from the North District are participating more actively in the youth and young adult fellowship of the church. In addition to this, the recipients of the scholarship were given hope in continuing their education.

According to Rev. Sylvester Bob Holima: “This project has created confidence and sense of belongingness in the students who were ready to continue with their education. The [project also contributed to stop stigmatizing Ebola survivors] in the Northern District of Makeni where there was a recent outbreak of Ebola. The package for the students were timely but also challenging because the the number of those who need assistance far outweigh the available package.”