Psalms 24:1 reads, “The earth is the Lord’s. The world and all its people belong to Him.”

Protecting water is not only benefiting us and our future generations, it is honoring God by taking care of the world He has made for us.

I found myself on a cold October morning marching with hundreds of water protectors on Highway 1806, Cannonball, ND, in support of the Sioux tribe in protecting their water from contamination from the Dakota Access Pipeline (DAPL) and much more. Bundled up and teary eyed, I was constantly reminded by the leaders to be in prayer. Standing Rock is a place of peace and hope.

That day, I got up before dawn to be at the protector’s camp to listen to the morning announcements. There was a call to action. I watched as water protectors from all over joined together and lined up for a cause much bigger than themselves. I watched as these humans held their signs, pleading for their water to be saved from contamination and for their burial grounds to be left alone. I watched as the elders walked as far as they could before sending forth the young into something that is almost a war being fought by billion-dollar companies against the common people. So much emotion was in me; I wept. Here were beautiful souls of all nations and ages, standing up for something they believed in. They were doing their duties as caretakers of this land which has been given to us by the Creator. They receive no reimbursement or glory for being on the front-line. I walked with the protectors to the boundary of the pipeline. The leaders asked that all cameras be turned off so they could lead the protectors in prayer and song. We prayed not only for the safety of the land, but the safety of the DAPL workers and the hearts of everyone involved. We prayed that our own hearts stay filled with love for the people fighting against us. In the midst of the ceremony, eagles began circling overhead. As the day went on, various ceremonies took place. Unfortunately, at one point, I heard gun shots go off. Even with that, I never felt fear or the need to leave. I knew whatever was to happen was in the hands of God and I had a reason to be there. Later, I learned the police had shot down a camp drone.

Being at the camp was an experience I will never forget. Every person I met was kind and willing to help answer my questions. The camp is very organized. When I asked about going to the front-lines, I was told I must go through training so I could get prepared. There were rules for the camp to keep the peace. I want to emphasize how peaceful the camp was. There was such a feeling of warmth and humility.

National media coverage on Standing Rock has been minimal. I found it disturbing to hear the local media express how violent the “hippies” and “protesters” were. Greed has been the instigation of the North Dakota Access Pipeline. Since my visit, many injustices have happened for the want of profit. I understand that oil is essential, but at what cost? There have to be alternatives. Though the easement has been declined, the fight is far from over. God only knows how our battle will play out. It is our jobs to stay standing. 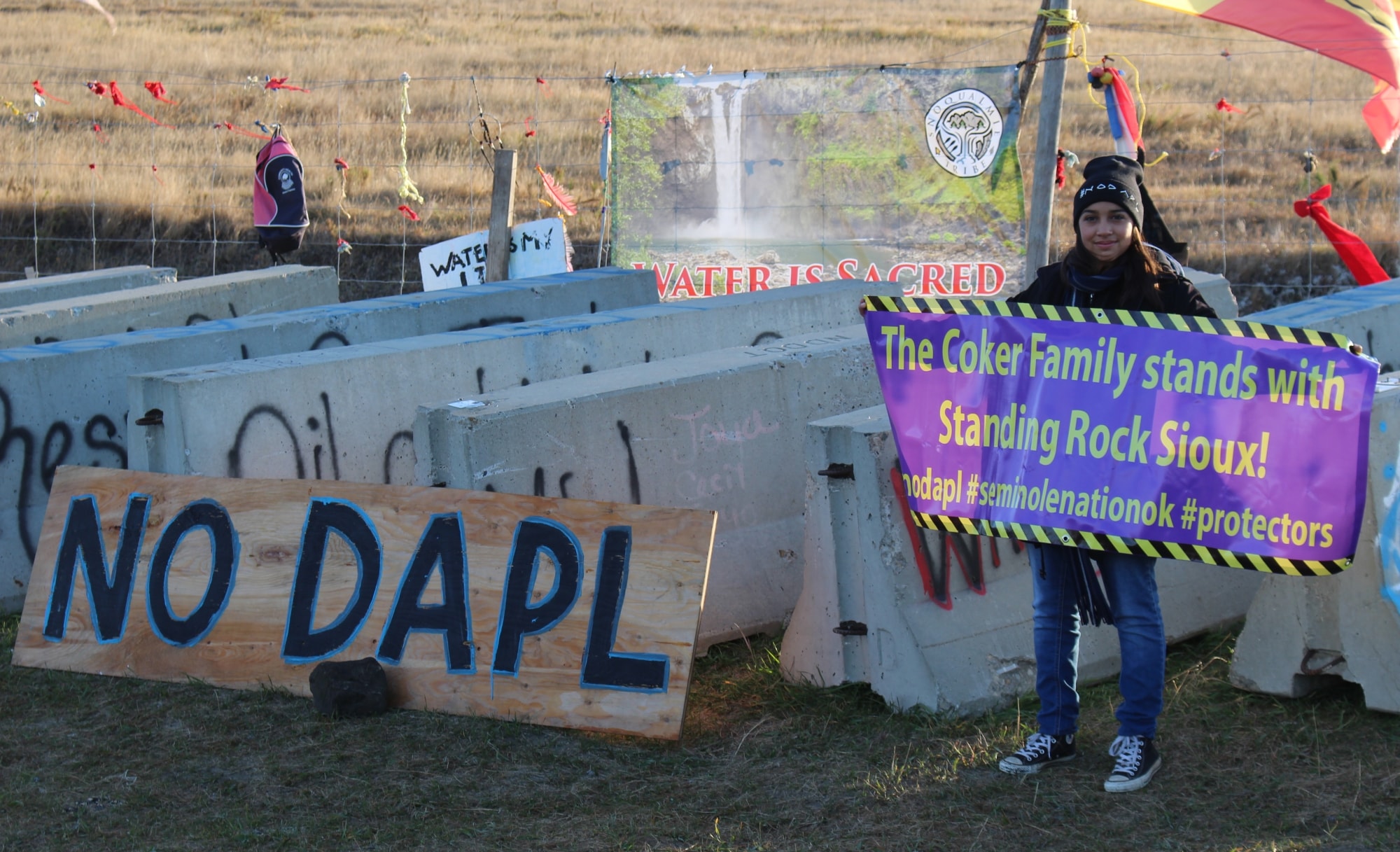 My experience at Cannonball, North Dakota has taught me that everyone has a voice; we all just speak it in different ways. Also, everyone has a passion. Use your voice and your passion to help stand up for something. There are many problems in this world, many of which we may be oblivious to, and may be guilty of ourselves. But, something as small as a share on social media can start a change or raise awareness. Just remember to honor God in all that you do, and pray for guidance. Know that you can change the world with prayer, hope, faith, and a little bit of courage. He will take you places you would never imagine. It is up to us to protect His world and His people.

I ask for prayer requests for the following protectors who have been severely injured:

Freedom Coker is a Native American high school student in Seminole, Oklahoma. Freedom is currently serving a term as a youth on the Division on Ministries with Young People. Thank you to her (and her mother Brenda!) for this account of Freedom’s travel to Standing Rock in 2016.