A Special Follow Up with Young People from General Conference 2016 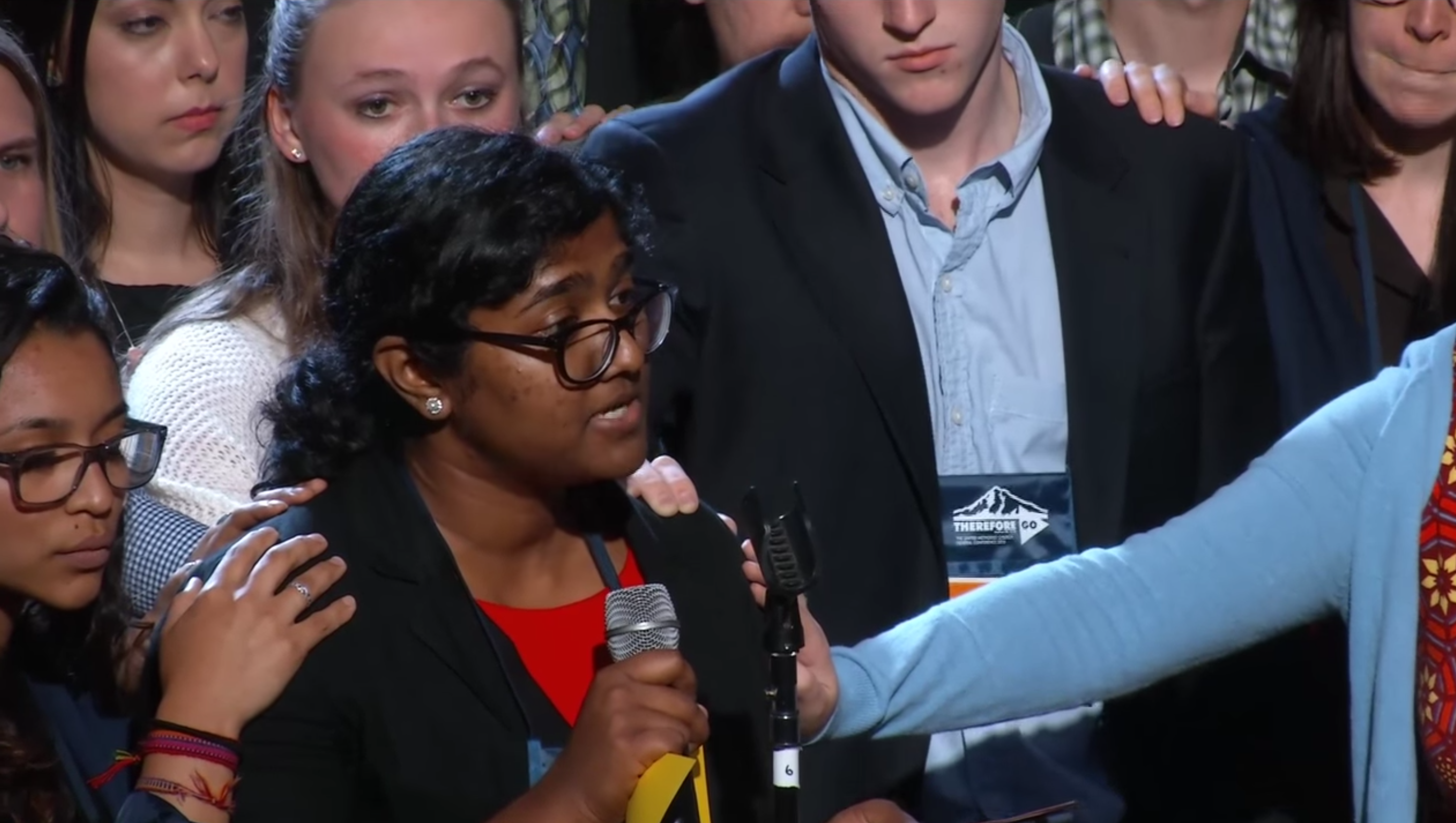 General Conference is over and done. Well, sort of... We still have that potential called conference looming over us. The effects of May and subsequent Jurisdictional Conferences are still reverberating throughout the connection. But for now, the travel for General Conference is completed, and the blogging has begun. We thought it would be good to check in with the young people we heard from earlier and let them share their experiences with you. Back in April, we spoke with these same folks about their expectations for General Conference. Check those interviews out here.

His Pre-General Conference hopes: I would love to see a more united church where young people's matters are heard and young leaders are trained (provide scholarship to schools/universities) and also involve them in the leadership of the church because they hold the future church.

The 2016 General Conference was an amazing experience I had as a Young Delegate from my annual conference in Zambia. I learned a lot of things which I never understood, that is with regards to the leadership of my church which I have served as a young leader in various positions since the time I was a 15 years old. I may say the 2016 General conference has helped me gain more confidence and strengthen leadership abilities in me. I also noticed that I was the only young leader from the southern region of Africa. I thank all who have been supportive to me at the General Conference and also putting trust in me to participate in certain programs of the General Conference.

His Pre-General Conference: My hope is that no matter what happens, no matter what does or does not change, we can remember why we are United Methodists, and that I can leave knowing that yes, we are divided and yes, we are in decline, but we are more than our struggles…My hope is that we can look at the hard things, talk about them, and address them in a positive way, but among those discussions and in spite of the hard issues, we are a church that is creating disciples for the transformation of the world.

This General Conference was a roller coaster of sorts. We took almost three days to set the rules and reject rule 44, which I believed could have been a good, new way of looking at an issue. However, many subcommittees, including mine, used this system anyway, which proved to be very helpful.

I was proud to be a part of my delegation, the Great Plains, who had a hand in “A Way Forward” from the bishops, which was put together over tacos. Of course, a revised form of that was rejected, but the original text was later adopted. I found this incredibly ironic as this was essentially a revised form of Rule 44. Personally I believe that “the Way Forward” is indeed a good thing for two reasons: First, we are being given a different way of debating this issue. The truth of the matter is that there is simply no way that 864 people can have a healthy or helpful debate on such an issue. Second, the church should have died on May 18th. Had we begun debate on all of the 60+ petitions dealing with human sexuality, I firmly believe the church would have split, and it would have been ugly. “The Way Forward” may indeed result in a split, however the decision to split should be made over prayer and deep conversation, not by mere gut reactions.

My real frustration with this General Conference was how little attention was paid to some truly incredible things. Less than two minutes on the 60th anniversary of ordination of women in the UMC. Less than 5 minutes for the 150th anniversary of the UMW, one of the greatest parts of our church. What did we spend our time on? Pointless points of order and other stall tactics from all sides that led to virtually nothing getting done. Don’t misunderstand, some truly great things came out of GC. My legislative committee passed a completely reworked resolution on crime, resolutions on the systemic racism in the American judicial system, resolutions on the importance of education and other truly incredible stances made or reaffirmed. However, we still left so many resolutions untouched.

Still, there were moments quite incredible for me. For the first time at GC, English speakers had to use translation devices as Bishop Streiff gave a presentation and chaired a session in French. This was an amazing demonstration of the church living into our global nature. In my legislative committee I spoke a few times and when I spoke I was being translated into 6 languages. Of course this is what happens at a General Conference, but I am still in awe that I was able to share my beliefs with other United Methodists even though we do not share a common language. There were moments at this General Conference when I was afraid of where we were headed, and incredibly frustrated with how we conduct our business as a church. That being said there were also moments that gave me hope. I am cautiously optimistic about our future and I hope that we can truly create disciples of Jesus Christ for the transformation of the world.

His Pre-General Conference: I hope that we can embrace our vast differences and begin to view them as tools to aide us in ministry rather than walls that divide us.

Participation in General Conference 2016 was simultaneously one of the most invigorating and disheartening events in my life. On one hand, I was blessed with 10 days of amazing worship, reuniting with friends I haven’t seen in person in years, making new friends, and involved in deep, thoughtful, and loving conversation about the future of the church. On the other, however, it was 10 days of 12-14 hours filled with debate, frustration, and fear. It was both beautiful and stimulating along with scary and draining. In particular, I remember walking throughout much of the conference with a high level of uncertainty-uncertainty of what an outcome would be, what the future should be, or even what the next motion would be. As I move away from this General Conference, I feel as though this uncertainty has stayed with me and with many. The decision to form the special commission, although I view it to be beneficial and a strong step forward, lacked closure and certainty, and it moves us into another several years of conversation, anticipation, and uncertainty. May God guide us on the journey.

Additionally, I think it’s important to note the young people’s presence at General Conference. Young people led legislative committees, led delegations, gave an amazing young people’s address, provided a prophetic witness calling for unity, were translators, volunteers, and represented the young people of the United Methodist Church very well. Throughout my experience I was constantly impressed by the young leaders I found there. Although I think that the Church is still learning how to effectively engage and work alongside young leaders, I am thankful for my many peers that are boldly leading the way.

Her Pre-General Conference: My hopes for the United Methodist Church are that we remain united in our goals and our vision. I wish for the church to come together with open hearts, open minds, and open doors on a variety of difficult issues and concerns before us at General Conference.

For me, General Conference was a great experience overall. I was able to meet fellow young adults that shared my views, as well as ones who challenged my way of thinking. I have been asked by many, as a first-time delegate, would I want to come back? My answer is an emphatic & urgent one: YES! There may have been decisions that made me weep and those which made me cheer, but I was blessed to be a part of that process. My voice was at that table and how could I ever want to give up that space? My hope for the next General Conference, be it a special session or the one in 2020, is for more conversation and more space at the table. I want everyone to see that General Conference is that place where we come together to talk out our differences of opinion, not just fight across the aisles.

How can I say this any other way but, “it was fun!”? Coming into General Conference, many of my mentors and close friends informed me that General Conference was a nightmare, but to my surprise it wasn’t that bad at all. I was elated to meet so many people from across the connection, and I thoroughly enjoyed the debates I had with some of my colleges. The array of cultures, languages, ideologies, and everything else was phenomenal.

Two of my favorite experiences was the African worship held on the first weekend, and having to focus on an interpreter in order to understand what my friend was saying in our subcommittee. Portland provided me with a tremendously great experience, and I was blessed beyond measure to be a delegate to General Conference. I hope to be elected again for the next quadrennia, but until then, I’m anticipating the special called conference that is expected to come.